How to Stop Intergenerational Trauma

In this fascinating episode, I talk with Dr. Nima Rahmany about the root cause of stress and where stress originates. Dr. Rahmany believes it is the result of intergenerational trauma.

Dr. Rahmany is a Chiropractor turned ‘Edutainer.’ He is the creator of The Overview Method (TM) and The Trigger Proof Show. He has helped countless people who are stuck in toxic relationships, career limbo and emotional trauma.

Dr. Rahmany says “If you want to heal, it’s the duty to be the cause of breaking the cycle of intergenerational trauma in your family.”

He recognizes the trauma didn’t start with you, but if he doesn’t address the trauma of your childhood – he is not able to get to the root cause of what is going on in your life.

#155 The Root Cause of Stress feat. Dr. Nima Rahmany

The Impact of Intergenerational Trauma

Dr. Rahmany shares the symptoms of living with intergenerational trauma:

Intergenerational Trauma is Impacting How We Respond to Stress

The pandemic is stressful, Dr. Rahmany points out.

But he then points out that throughout the pandemic we’ve seen people responding in different ways.

“None of this is about coronavirus. It’s all about what’s already stuck in your body from 9/11, from the Great Depression, from slavery.”

He goes on to say the coronavirus, George Floyd’s death and the following riots weren’t about any of that. Instead, he says it was about the intergenerational trauma of slavery.

He says the intergenerational trauma going into coronavirus was already making us feel unsafe in our bodies. He says we were already dealing with challenges in relationships, we already were holding onto grief that’s unresolved from a breakup or a lost loved one, or the divorce that happened with your parents that happened when you were 8 years old and you were thrown into a situation where you had no control.

“It’s all those unresolved things right in your face, but now we’re going to blame Trump or Biden or China. We’re just trying to make everybody responsible to give us safety and security that was lost in that younger time,” he said.

He says that’s why now is the exact time to address the resistance, shame or feeling of unworthiness in your life.

How to Stop Intergenerational Trauma

“The cycle didn’t start with you, but it can end with you,” Dr. Rahmany shared with me.

He shares the idea that a 3-year-old daughter spills her juice on the floor. The parent reacts yelling, “WHY DID YOU DO THAT!?”

Immediately, the child feels a lot in her nervous system. She then makes up a story of “I’m bad.”

The question is now ‘How to Stop Intergenerational Trauma?”

Dr. Nima says in that moment, as the parent, you need to ask “Why am I triggered by this?” “What was the story I made up when she spilled the juice?”

Dr. Nima shares a story of having this conversation with a podcast host who realized he had yelled at his child. When he asked the podcast host about the story he made up when the juice was spilled – the host said, “That I’m a bad parent.”

In this ah-ha moment, the podcast host realized he got that story from his dad.

Dr. Nima says, “Do you realize how big this is?”

He says breaking the cycle of intergenerational trauma happens in the moment between stimulus and response.

Dr. Nima shared this quote from Man’s Search for Meaning, “Between stimulus and response there is a space. In that space, lies our power to choose. In that choice, is our freedom.” 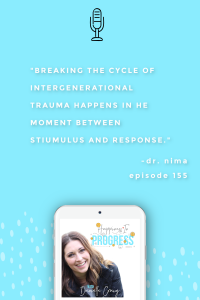 Start to practice widening the gap between the trigger and the response, “The longer that we can stretch that gap. The more we are able to choose our adventure. If we don’t, the unconscious runs the show and we are destined to live in the perpetual effects of intergenerational trauma.”

There’s much more you don’t want to miss in this episode!

More in this episode:

Calming the Chaos with Meditation

Learning to be a Good Human feat. Lydia Slaby

5 Ways to Deal as a Burnt Out Mom