I’m guessing you’ve been there – not prioritizing self care and in desperate need of something like a not to do list. Alana Dawson shared her experience that so many of us moms can identify with.

“Rarely was I focused on the quality rather than the quantity because I was trying to make the most people happy, trying to say ‘yes’ to as many things as possible – over extending myself, over extending my family. My poor family didn’t get the best of me. They got the last little chopped up slivers that were left over. By allowing myself to focus on those few things – the quality for sure is much better.” – Alana Dawson

Alana Dawson is a growth podcast coach and the host of The Podcasting Party Podcast. She is a military spouse, mama to two daughters & one French Bulldog.

I loved talking with Alana – I laughed, cried and felt inspired. Keep reading to hear about how she had a big wake-up call that ultimately inspired the not to do list. I like to think of it as a way of prioritizing self care.

The 'Not To Do' List | Reducing Overwhelm & How to Prioritize feat. Alana Dawson (Podcast Episode)

At just 32-years-old, in the best shape of her life – Alana Dawson woke up with what she thought was a heart attack.
When she got to the hospital, she learned she was having a pulmonary embolism.

Although Alana thought she was having a heart attack – she fully expected to make a full recovery. She told me the story of being strapped in at the hospital – telling her husband to take a photo saying, “The girls will think I look like a race car driver.”

Her husband stopped her to say, “I don’t think you understand the severity of what’s happening here.”

It wasn’t much longer before she would understand the severity. During the Happiness in Progress podcast episode, Alana details being wheeled down a hallway. As she looked in the rooms – she says she recognized many of these patients were on their death beds.

“I was like ‘oh my gosh – they’re wheeling me in to die. I’m going to die here,” Alana continued, “that’s when it hit that I may never see my kids again.”

She explains it wasn’t that she wasn’t doing things well, but she was stuck in a rat race. 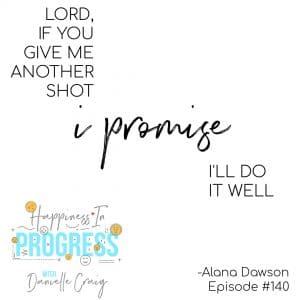 “I was your typical suburban mom. I was running the rat race and I was running it really fast and really well. Bigger, faster, stronger was my game,” Alana explains.

Okay, mamas – you know what this is like. It’s PTA/PTO, homemade cupcakes, elaborate parties, invovement in the community, the classroom — and that Pinterest worthy home decor.

Alana explains that in those moments of contemplating death – the biggest concern she had was for her daughters. She wondered if she had taught them everything they needed to know and if they could grow into the people she wanted them to be. 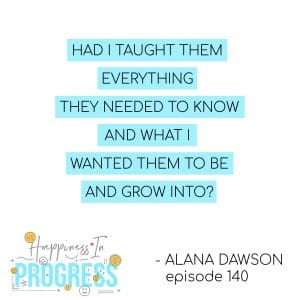 “Did I teach them the most important things? When they’re graduating from high school, when they’re walking down the aisle – will they remember – here’s what mom said, mom always said this?”

When Alana entered recovery at home – she physically had to step back from a lot of prior commitments. But she had also made a decision that she would make her children a priority, her family a priority and her faith a priority.

She and I laughed as she told me about the volunteering in the classroom she did, but like the –  why do we do this to ourselves kind of laughter. 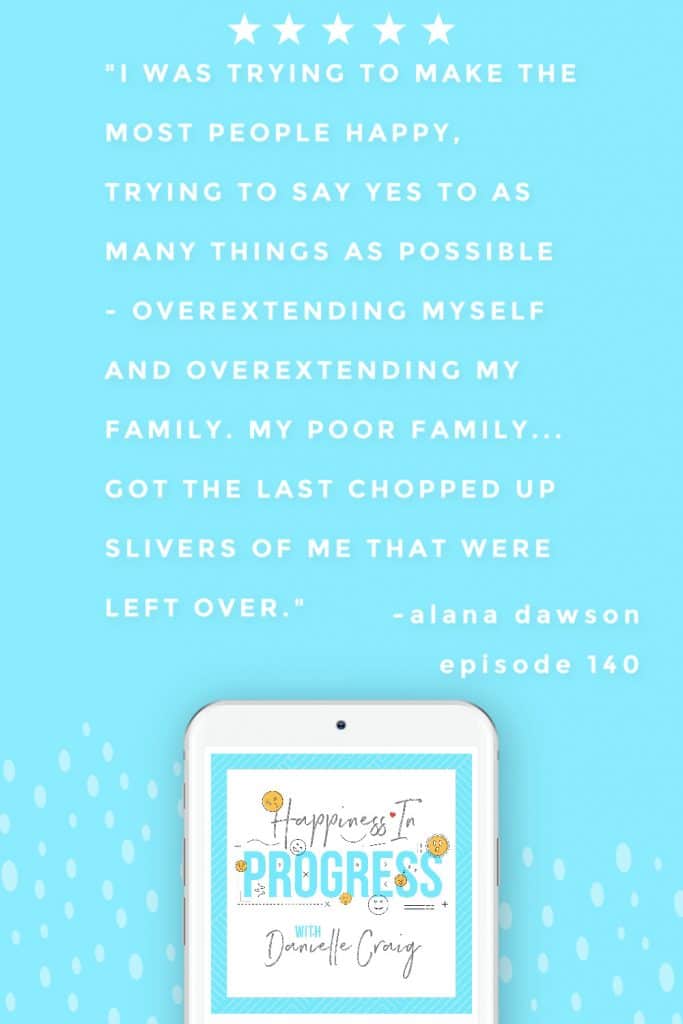 I’ve been guilty of saying “yes, I can do that” when I probably should have said “no” too.

Alana said she was dreading calling the teacher (again – not her daughter’s teacher) to resign her volunteer position.

After Alana told the teacher the news, the teacher responded, “I don’t know what took you so long.”

There is just so much grace from people when we need to start saying ‘no.’

However, Alana had to start adjusting her expectations of herself… and the expectations other people held her to. Listen to the full episode to hear about how she did this.

In the aftermath of the pulmonary embolism, Alana took a hard look at her life and asked herself what she wanted it to look like.
“If I were going to design a life, what would it look like? I realized I could only focus on a few things and focus on them really really well.”

Seasonally, along with a list of 3-5 priorities – Alana writes what she will not be focusing on or accomplishing for the season.
She says it frees her from everything that’s not a priority.

“It gives me permission to not focus on those things, but focus in on where I really need to put my time, money and effort.”
She says it lightens her load because what we focus on has power.

By the way – post pulmonary embolism – making sure her children know exactly what mom is teaching them – is always on the priority list.

Becoming more intentional does take practice – which is why we call things like mindfulness a mindfulness practice. Here Nicola Taggert shares what she created to make a difference in our intention and mindfulness.

Mentioned in this Episode

When you subscribe – you help my podcast be seen by more people – which in turn helps me continue to do this work. Please subscribe, rate with five stars and share.
You can listen to Happiness in Progress anywhere you love listening to podcasts – including Youtube, Stitcher, iHeartRadio, iTunes, at the Mail Tribune – and by asking Siri or Alexa to play the Happiness in Progress podcast.
New episodes every Tuesday at 5:30 a.m. P.T. and Friday.

If You Liked This Episode, Check Out These

Fighting the Overwhelm and Burnout
Perspective in Practice 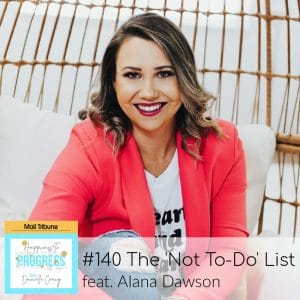 This podcast is brought to you by the Mail Tribune.
Amazon links are affiliate links – I receive a small commission when you click. Thanks for supporting my small business.

The Year of You

How to Set Boundaries with Family

How to Set Boundaries with Family