Losing their 15-Year-Old to Suicide

The start to Dane Halbert’s fight against suicide is the worst day of his life. Dane lost his 15-year-old son to suicide.

It has been just over five years since the Halbert’s lost their son, but Dane says the pain is still strong and the nightmares continue.

Dane describes his son Keylo, or ‘Bear’ as they called him, as a young man who wanted to make everyone happy. He was always going out of his way to make another person smile.

Although he was a light to those around him, Keylo struggled with bullying from others. He also dealt with chronic pain, even as a young teenager. The Halbert’s believe the weight of those things became too heavy for him to carry.

Not Even on Their Radar

Though the Halbert’s knew Keylo was dealing with pain and bullying, they would have never considered their own son would die by suicide.

This is one of the reasons they’re so passionate about giving other parents and teenagers the tools to recognize suicidal ideation in others.

“If we can help one family or someone’s friend not have to go what we’re going through – because it’s a living nightmare every single day – if we can help one child or one adult not take their own life than we’ve made a difference,” Dane said during the Happiness in Progress podcast.

That’s where Bear4Life comes in – an organization to fight against suicide.

I told you Keylo was called Bear. Dane told me, with tears in his eyes and a smile on his face, that the nickname came about when Keylo had the chance to pet a bear at Wildlife Images, a wildlife rehabilitation center.

Now, the name memorializes Keylo’s life, by fighting for every single life on the Earth today.

Through Bear4Life, for youth suicide prevention, Dane and his wife, teach people about four steps to spot those with suicidal thoughts and know how to help them. Their goal is to

(B)e available: Be the listening ear
(E)ncourage: Tell them they are loved, needed and suicide is not the way out
(A)sk Hard Questions: Don’t be afraid to ask your loved ones if they are considering suicide.
(R)epsond/Refer for Life: Commit to getting them in touch with the resources they need to be successful. In some cases, this will be calling 911.

In this podcast episode, we talk about what the four elements of preventing teen suicide looks like. Listen to the full episode for details on each step. 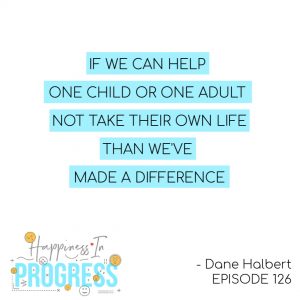 If you move through these steps, including asking your loved one if they are considering suicide, and you have an immediate concern – call 911. And yes, Dane says, call even if you’re not sure it’s the right thing to do.

“It’s easier to make that phone call than the phone call to the parents, or the husband or the wife and say I’m sorry – this person’s now gone.”

There is a lot of really good information on this podcast – plus, an article will never fully represent the passion in a father’s voice.

If you need to hear it from Dane himself – please listen. But know –  you are needed. You make a difference. You matter.

He says, suicide is not the way out.

“All there doing is, they get rid of their pain and they pass it along to a lot more people,” Dane said as he shared this teen suicide fact, “On average there’s 150 people who suffer from one suicide. That’s just on average.” 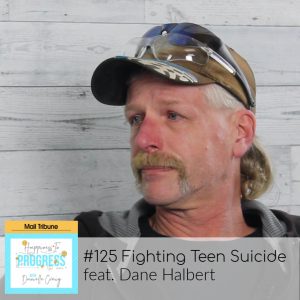 You can listen to the full podcast episode by pressing on the play button in the Youtube video, on the podcast player at the top or by heading to the Mail Tribune, Stitcher, Apple, Youtube or online.

Clean Out the Mind

Living the Dream and Nightmare (Surviving Being Burned Alive)

Don’t Write Off the Year Just Yet