Today we’re talking all about honesty – why we lie and how honesty or dishonesty impacts us, our relationships and our communities.

Today’s guest is award winning journalist, Judi Ketteler. She is the author of Would I Lie to You? The Amazing Power of Being Honest in a World that Lies.

You may have seen Judi’s writing in the New York Times, Better Homes & Gardens, Good Housekeeping, SELF, Women’s Health and many more.

**For mamas who listen with kids around – we do talk about Santa and sex. You might want to put those headphones on**

‘We’re so afraid of what it will feel like to be honest.’

#115 Being Honest in a Dishonest World feat. Judi Ketteler (Happiness in Progress podcast)

I asked Judi why we lie – and I was surprised by the answer, only because it comes back to fear. Honesty is another place where we let fear stand in the way of our success.

Judi uses herself as an example saying sometimes it can be hard to speak up about a situation when you don’t like confrontation or if you’re a peacemaker.

“It’s hard for me to speak honestly about things and to confront situations,” she said.

She points to research from Emma Levine about how we misrepresent what honesty will feel like. For the study, the participants were broken into groups. One group was expected to be honest for three days. Before this started, they asked the group how they felt this would impact them. Their responses came back negative. The participants were worried about how they would be perceived, how it would impact their relationships, etc.

When the experiment ended – that same group said they found meaning and connection and “it wasn’t the awful thing they thought it was going to be.” 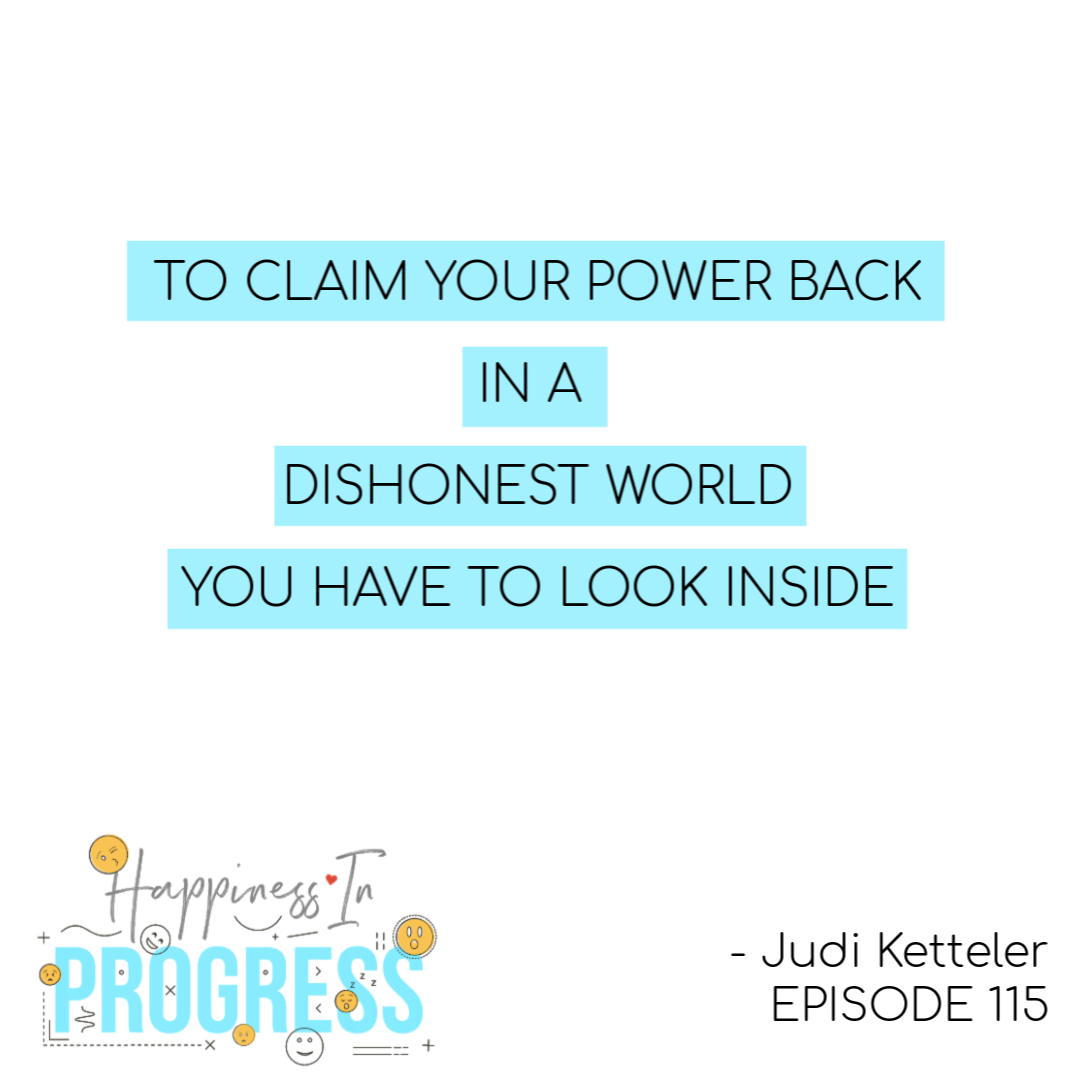 Why Honesty in Parenting Matters

Do you want your child to ask you what a blow job is?

BUT – the alternative is your child googling “What is a blow job?”

When I read this in Judi’s book, along with a dozen other semi-shocking questions, my jaw hit the floor. As I’ve thought on it, I’ve realized I am the person I hope my son turns to with that question.

Would you prefer your child get your explanation instead of whatever in the world will pop up on a google search to that same question?

Judi said, “If we don’t give them honest answers, they are going to go look it up. Or they’re going to get it from memes.”

In this episode of Happiness in Progress, Judi explains how to be thoughtfully honest. This means we consider a few things including their age, their level of concern, where they are mentally and what they need.

It also includes a chance to impart values to our children.

Judi gives the example of one of her kids asking whether she and her husband would be getting a divorce. Judi told me she used to just say, “No, of course not.”

But now, to not only answer the question, but impart values – she explains that marriage is hard work, that she loves their dad and they’re committed to marriage.

In the parenting part of the podcast (and the book!) you’ll hear about how Santa plays into being honest. Is keeping up the story really lying to our children?  Check it out here.

Being Honest in a Dishonest World

We are in the thick of election season – and the same reasons that prompted Judi to write the book are in the headlines – yelling, name calling, overall dishonesty.

A really powerful part of this conversation calls for people to check their own honesty. Yes, we may not be able to individually make an impact on whether our lawmakers are being honest –  but we can hold ourselves accountable.

Judi explains how her honesty project has impacted her friends and family – including how they’ll contact her to tell them about honesty choices they’ve made in their own lives.

Judi’s first principal of honest is to be aware.

Check out the full episode to hear what Judi observed during the 2016 election that prompted her to start her honesty journey.

More on the Episode of Happiness in Progress:

#46 Jeanette Schneider, Harnessing Your Past to Create Your Future

How to Reduce Anxiety with Meditation and Mindset

Getting Out of Debt Together feat. Jason & Ashleigh Mayfield