Getting Out of Debt Together feat. Jason & Ashleigh Mayfield

I know talking about finances with your spouse isn’t always easy which is exactly why I turned to Ashleigh and Jason Mayfield. These two have had to talk A LOT about money. They have built a business online through social media and Youtube – and used it to get out of more than $60,000.

In this episode we talk about having those awkward, maybe contentious, conversations with your partner about getting out of debt and changing your spending habits. We also chatted about starting a plan to get out of debt as the holidays approach. This is exactly what the Mayfields did.

Plus, you’ll hear about how the financial burden of debt paralyzes us, the three things they did right at the beginning of their journey to set themselves up for success and how to start building wealth. 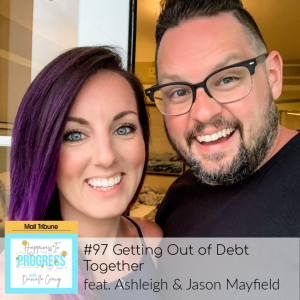 In 2014, on Thanksgiving Day, Jason and Ashleigh Mayfield were driving across Michigan for the holiday. At that point, Jason says he floated the question, “What would it look like if money wasn’t a factor in anything we did?”

They had started realized they were dependent on his employer, a ministry, for their financial support.

However, the first attempt wasn’t perfect.

Yes, they had actually accumulated more debt since the 2014 revelation of the need (and desire) to get their finances straight. 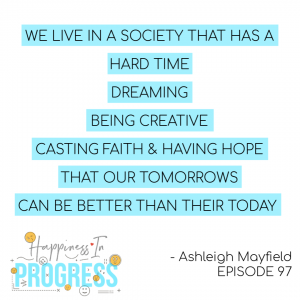 The Mayfields say, “The more money you make, the more options you have, the more problems you can solve, the more risk you can take.”

Ashleigh says their relationship has seen a huge change – they argue less, but when they do the arguments look different. Their stress points are different, they sleep better and even make love better at night.

They point out how financial stress touches every part of your life. Maybe you’ve felt this way – when it’s not just an awkward conversation about money, but the big bad wolf hovering over you.

The constant pressure is so strong, Ashleigh says so many of us are bound by money. She says generally speaking, humans are having a harder time being creative, dreaming and casting their faith to have hope that their tomorrows can be better than their todays.

Jason talks about recently getting an oil change and reminiscing on when something like an oil change was a big deal – with money that wasn’t readily available.

Like many people before them, and more to come — they followed Dave Ramsey’s Total Money Makeover plan.

You guys. The hardest thing to hear out of Jason’s mouth is how he got this plan into action. The two of them had $10,000 in savings when they started this.

Hear more about the day to day lifestyle changes they made to throw money at their debt.

HOLIDAYS ON A BUDGET

The Mayfields started their debt free journey in October, just in time for the holidays. That year, they literally cut coupons to buy their children gifts from Walgreens. The two of them exchanged washcloths.

They also urge you to sit down with a paper and answer this question. What would it look like if you could spend $5k on Christmas without money being an issue? Keep that as your motivation (PS – the Mayfields are spending $4k on Christmas this year).

HAVING THE MONEY CONVERSATION

One of my favorite parts of this episode is when Ashleigh explains Jason getting all up in her business when she bought one too many sushi meals. She said she’d say to Jason, “Get up off my back, bro.”

A wonderful tip from the Mayfields – let your spouse pay the bills for a month. There might just be a disconnect between what’s happening and what your partner thinks is happening. By handing over the budget for the month – you’ll be able to open their eyes without any awkward – or contentious – conversations.

1) “You can’t defeat it until you define it.” – Ashleigh Mayfield, write down debt by debt so you can truly see how far into debt you are

2) Answer the question: What would Christmas look like if we could easily spend $5,000

MORE FROM THIS EPISODE:

You can listen to the podcast by clicking the play button above. You can ask Siri or Alexa to open the “Happiness in Progress podcast” for you. Or check it out at the Mail Tribune, Youtube, Apple Podcasts, Stitcher or anywhere else you like to listen to your favorite podcasts.

How to Become a Millionaire

If you liked this episode, check out Jessica Garbarino’s story of getting out of more than $50k in debt.

Enjoying the Journey, Not for the Finish Line

The Science of Compassion