When I had my ah-ha moment to start the podcast, Happiness in Progress, it was because I realized I was learning so much from every. single. interviewee I talked to.

In these interviews I learned about life, the human spirit and humanity in general. As I drove home from countless interviews, I translated their lessons into ones I could use in my own life.

I would write their story up in a quick 90 second spiel, but part of their story was lost.

The part between the soundbites.

That’s why I wanted to bring full conversations – the full interview to you.

I was talking to the incredible Lex Gillette. He’s a Paralympian for Team USA in the Long Jump. He lost his eye sight when he was just 8 years old.

Imagine how that would change your life. Imagine losing your sight at the age of eight. 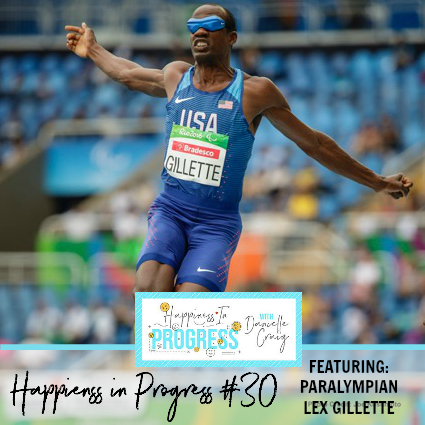 Lex told me the social part was the hardest, but it was what he said next – about how he was able to gain confidence socially that changed me.

He said his mom was his real game changer.

“She always instilled in me that you have to be able to go out into the world on your own.”

He started listing all the ways she helped him be independent – hired a braille teacher, found resources — and the big one for me – kept him in public school.

He told me she wanted Lex to have real world experience, “She wanted me to stay in that environment where I could interact with others who could see because when I go out in the world – that’s what the majority of the population is.”

See – my son has different challenges in his life. He has a food allergy. (Look, I know these are not comparable. I’m not comparing them – I’m simply learning from another’s walk through life).

I have, on many occasions, considered keeping my son out of public school to keep him away from those potentially-deadly PB&Js. I’ve also considered joining the rally cry for peanut-free schools.

In fact, there used to be a time where I’d cringe at peanut products in the store. I would seriously consider writing companies to throw out their peanut-flavored everything.

But here’s the thing.

The majority of people can eat them.

Lex’s mom taught me to give my son the tools he needs to be successful. He needs to know how to navigate a world with peanuts.

It even means, from time to time, being left out.

I’m taking a page out of her playbook – let my son struggle in the short term to succeed in the long term. And if he ends up half the man Lex Gillette is – I think he’ll be doing pretty good.

Here more from Lex, by listening to our conversation on Happiness in Progress HERE.

Ending a Lifetime of Negative Self-Talk

A Changed Perspective: What My Miscarriage Taught Me About My Sons