3 Ways My News Job Made Me a Better Parent

In news – you see the very worst of humanity.

Somehow though – you also see the best.

When a child was kidnapped – an entire city came out to go door-to-door to look for her. When an historic barn burned down – a community donated time and money to start rebuilding. When a child is fighting for their life – neighbors make dinner, babysit and raise money.

It’s a humbling whirlwind to witness crisis and generosity in the same breath.

As a reporter, I would walk into people’s homes – many times during the worst moments of their lives. As they mourned or fought or prayed – I would walk away a better person for the lessons they taught me.

That’s a big reason I chose to start the ‘Happiness in Progress’ podcast. I wanted you to hear the full conversation – not just the 90 seconds of their struggle. But their story, their pain and triumph.

I have learned so many things from the people I’ve interviewed. In fact, I’d go as far to say I’ve never NOT learned something when I put a camera in someone’s face.

Today though, I wanted to pick just three examples of how intimate interviews changed my parenting perspective. Some of this I talked about in Episode 7. 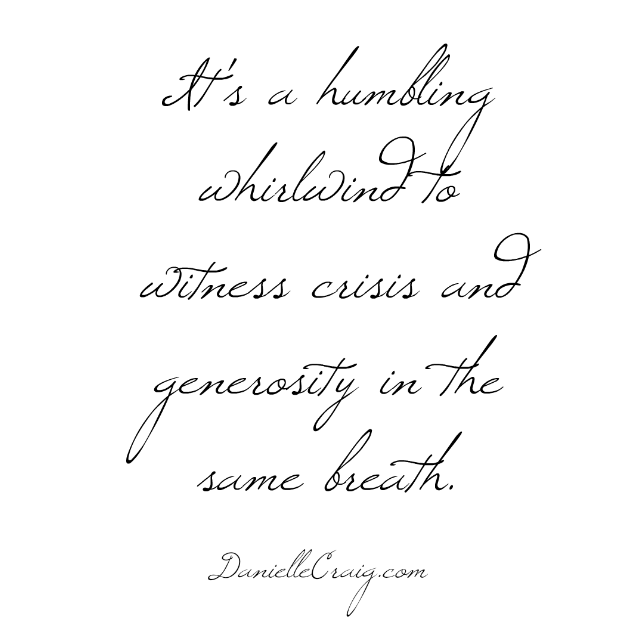 Fresh of maternity leave I started a franchise segment about a non-profit helping children in medical need. That means I would do weekly stories about kids, in many cases, fighting for their lives or at least a sense of normalcy.

Early-motherhood didn’t look good on me.

I remember waking up in the middle of the night before my early-morning shift – I hated it. I hated hearing the midnight cries.

Or maybe worse – he just wants to be held.

In a zombie-like fashion I made my way to a family’s home with a camera in tow.

I was shocked when I walked into the little boy’s room. The little boy had been called the most medically-involved child in our area. I could see why. It looked like a hospital room – ventilator, feeding pumps and tubes, oxygen tank, rubbermaid drawers filled with syringes and other medical tools.

He had a form of dwarfism and was born premature.

But he had started having seizures in which he would stop breathing. His parents told me their were times they weren’t sure if he would make it.

His required care meant his parents had to wake up routinely around the clock to do several things to keep him breathing, to keep him from being infected and to keep him okay.

This is like having a newborn forever, I remember thinking.

His mom looked at me and told me some people had asked if it would be easier without him.

She told me that she answered “absolutely not.” She said everyday with him in thier lives was a blessing. She went on to say they were so thankful to have him alive. They were so grateful he was with them.

I drove away with a newfound sense of gratitude. I could be grateful for my situation that was much easier than theirs.

That night when my son woke up – I went in with a smile on my face. I remember cuddling my little boy and having gratitude (even though he woke up and I was losing out on sleep) that this little boy was with me. He was my blessing.

In the midst of raising two maniac boys while working a full-time job and doing all the “mom things” – I found days going by where I didn’t have any time to really engage my children.

I had emails to send, texts to read and phone calls to make.

My priorities changed after meeting a young boy’s dad.

This little boy had major sensory issues he was born with as part of a genetic disorder.

During an assembly filled with students, they were asked not to clap. This, while he rocked back and forth listening to music coming out of a round sphere with flashing lights.

When I interviewed his single-father dad, I asked him “What is the best part of being his dad?”

He started to cry.

Tears filled his eyes as he explained – when he looks me in the eye.

eye contact from my kids who so freely give it?

For this dad – it didn’t happen often, but when it did – his dad knew his son acknowledged and loved him.

I walked away lugging my big camera with plans to put down all the things to engage.

My second son has been a challenging toddler. He is fearless. No, not regular kid fearless. But like – legit fearless.

This is a kid who climbs tables, found a way to get to the backyard pool and isn’t afraid of cars speeding down the road.

One time, I found him in the laundry room where he exclaimed “I DRINK BLEACH!”

In a panicked call to Poison Control I realized he didn’t drink bleach, but remembered I told him not to do so. He was just trying to get a reaction out of me.

He is into everything.

I left my insane toddler with the nanny to do a story about one of the most incredible young men I know.

We had met years earlier – a boy with cerebral palsy who was told he would never talk or walk and should be institutionalized. Doctors were wrong (as they usually are with these inspirational, tenacious kids).

He could talk to me through his computer, would go on to walk and attend public school.

His mom had just discovered a new treatment that could help him progress (and now I know, looking into the future – it worked! He started walking that Christmas).

She told me about a conversation she had with his doctor.

As she talked, tears filled her eyes and her voice cracked when she got to this part of the conversation. “The doctor said, “And then he can get in trouble all on his own!”

Independence is what she was fighting for.

Independence is what I was fighting against.

When I hopped in my news car – as I usually do for the people I interview – I said a prayer for him and his family.

Then I thanked God that I didn’t have to fight for that independence they so wished for.

I have countless stories of the brave, strong, incredible humanity I have seen in our world. I will continue to share these as time goes on.

What is something you’ve learned from someone else that made you a better parent?

A Letter to My Daughter

The Rainbow in the Storm