5 Lessons I Hope My Son Learns From T-ball 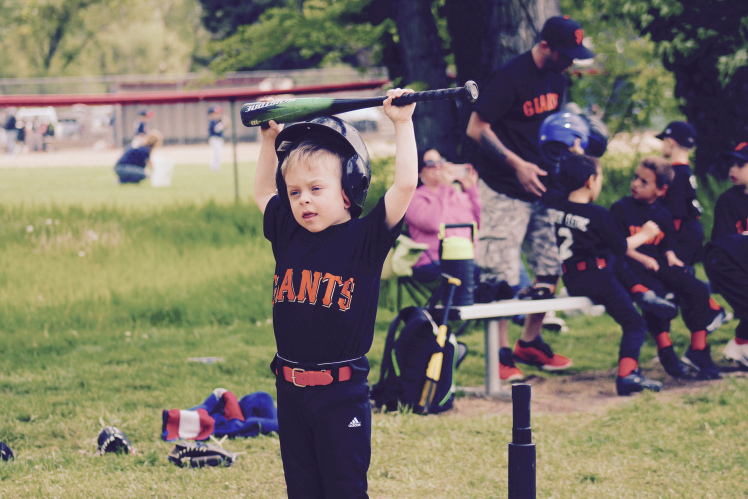 My 5-year-old J grabbed his favorite Boston Red Sox t-shirt, rolled up his brand new baseball socks and pulled on his cleats.

He was ready for t-ball.

No matter how much he looked the part, the fact that he had maybe held a bat twice in his life was painfully obvious when he stood in front of the tee.

I thought What have I done? He’s not naturally good at this? Maybe I should’nt have him do this. This is too uncomfortable for him.

My boy was a star. Hit that ball farther than most kids on his team.

I almost kept him from that? What if I would have pulled him from the game because he wasn’t “naturally good” at it?

I’ve realized that’s just one of the five lessons I want him to learn in the diamond.

During opening ceremonies J was the first player of the entire league announced. As he started to run the bases he tripped.

I could see his eyes fill with emotion as they do right before he’s about to cry. Instead of feeling sorry for himself, he stood up, looked around and booked it.

The crowd erupted in applause.

I want my boys to know – not falling and not failing is great (that’s what we aim for!). But there’s something even more impressive in the person who falls, the person who fails – and gets back up to start again.

We say – when you fail, you’re learning.

Poor J. He didn’t stand a chance during his first day of t-ball. We don’t play sports in our family and we don’t watch sports.

He left his first practice most likely the worst kid on the team.

When we got home we practiced.

And practiced some more.

By the time his first game rolled around – he hit every single ball the first time. This kid was on fire.

After the practice he came to me elated yelling, “PRACTICE MAKES PERFECT!”

There is no replacement for hard work and practice. If you put the time in, it will pay off.

3. Patience is a Virtue

Show me a five-year-old who has patience. Well, if you can produce one – just know, mine is not a patient guy.

And t-ball can be boring.

During his first practice, J’s first time in the field he spent making dirt angels as shortstop. Almost as good as the outfielder making it snow grass on her face as she also laid on the ground.

But inevitably the ball always comes to you.

In life, things are working, things aren’t moving – but inevitably the ball will go to your court. Give it time. Continue to pay attention. If you’re ready when you need to be – you’ll catch the ball.

I could not even contain my laughter during the first practice. Every time a ball was hit into the field, kids would just dog pile on top of the ball.

While the real teamwork probably won’t develop until their a bit older, I think this is the makings of getting out of the me, me, me mind set.

More than any other generation before – our kids only need to think about themselves. Imagine what these kiddos who have their entire lives documented on social media are going to think of themselves? Something tells me they’ll be just a little self-involved. Just a little.

Team sports, like t-ball, teach them they’re just one of many gears. They can do their best, but they need to work well with others to reach their highest potential.

Like I need to tell a kid that, right?

Believe it or not – my son thinks tying is better than winning.

I’m not sure where he developed this attitude. Maybe it was that time I lost the Emmy.

On our way to one of the practices he sang,
“It’s the best to tie, nobody loses, nobody wins. I love ties, they are the best.”

The lesson was about as iffy as the lyrics.

I want my kids to always do their best. I want them to aim for the ‘W.’

When they win – that’s a good thing. It’s not something to feel ashamed about. They don’t need to feel bad for someone else.

Was he ready for t-ball?

Yes, he was – Boston Red Sox t-shirt and all.